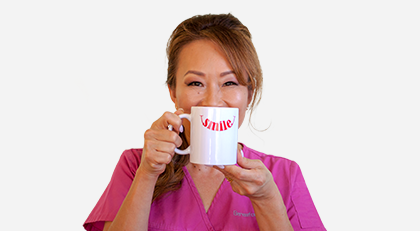 Francesca Beresford’s introduction to Australia was in 1975 where her father had been working as a chef. She migrated to Australia with her brothers and mother to join her father.

The Smile Pros cosmetic and general dentist is now decades ahead and oceans apart from her conservative childhood in Korea.

Despite not being able to speak a word of English, she was dux of the local school. Francesca enrolled at University of Queensland, securing a scholarship, two years into her five -year bachelor of dental science degree.

Having a scholarship, on graduation, in 1987, she was sent to rural Queensland area working for the Department of Health’s School Dental Service. She started with one mobile clinic based at Bundaberg, and within 6 months was promoted to head of district.

Working with children was satisfying and Francesca’s plan had always been to to study further and become a pedodontist, a specialist in children’s dentistry.

Her dream of further study to become a specialist was placed on hold as Francesca met her husband of 27 years, Darryl, in the rural area, made Gold Coast their home and had two sons. Later she joined her husband in private practice.

Francesca and Darryl opened their first surgery on the Gold Coast in 1991 at Robina Parkway Medical centre, followed by other surgeries, Treetops at Burleigh Waters, Q super centre at Mermaid Waters and Harbour Town at Biggera Waters which they later sold. They are now fully settled at Markeri Street surgery which was purpose built with installation of Australia’s first three dimensional cone beam scanner and Water laser, among other innovative technologies.

She is very proud of her family’s achievements, 2 sons, a chemical/ petroleum engineer, with a master’s degree and a medical doctor. Her husband, now a prosthodontist, was awarded with 4 more degrees in their marriage.

While she is working full time, running the busy practice and family, she attends many professional development courses and reads current journals to keep up to date with both clinical and personal skills. She has keen eyes for aesthetics, her obsessiveness to get everything right and love of arts and craft in combination with science make her job very rewarding and enjoyable.

In her busy schedules she enjoys cake decorating, managed to become a high level competition ballroom dancer, and was Australian Musclemania Masters bikini and classic model champion in 2016.

She is dedicated to creating smiles and preserving good dental health with minimally invasive technologies. “Only the best for my patients in a modern way” she says.

Our range of treatments offered at Smile Pro Dental.

If you have any questions about the treatments we offer, we would be happy to hear from you.