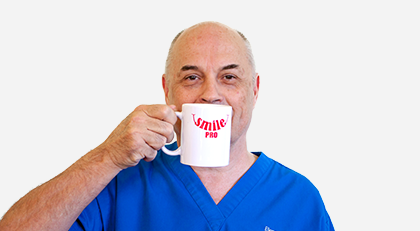 Dr Beresford is a Specialist Prosthodontist. He received both Science and Dental degrees from the University of Queensland while being conjointly enrolled for both in his final year as an undergraduate. He then continued his postgraduate studies with a Graduate Diploma in Oral Implants at the University of Sydney and the Master in Clinical Dentistry in Prosthodontics from King’s College London.

The Doctor of Clinical Dentistry in Prosthodontics for specialist registration was undertaken at the University of Sydney. His research project compared patient satisfaction with removable and fixed dental prostheses for rehabilitation of the edentulous mandible. The Membership in Prosthodontics of the Royal Australian College of Dental Surgeons was awarded by examination.

He is an advocate of innovative technology in Australia, purchasing the first Biolase laser in 1998, operating microscopes and Simplant implant planning software in 1999. He has been involved with 3D printing of bio-models for surgical planning since 2000 and platelet rich plasma since 2001. He was the first in Australia to purchase a Cone Beam Computed Tomography unit in 2003 and also among the first group trained with piezo-surgery in 2004.

Dr Beresford’s practice is restricted to prosthodontics and implant dentistry. He has extensive experience placing and restoring dental implants for 20 years and has now placed over 5000 dental implants. The practice has an onsite dental laboratory with several digital technologies allowing both, an analogue or digital workflow for implant surgical planning and smile design.

Our range of treatments offered at Smile Pro Dental.

If you have any questions about the treatments we offer, we would be happy to hear from you.